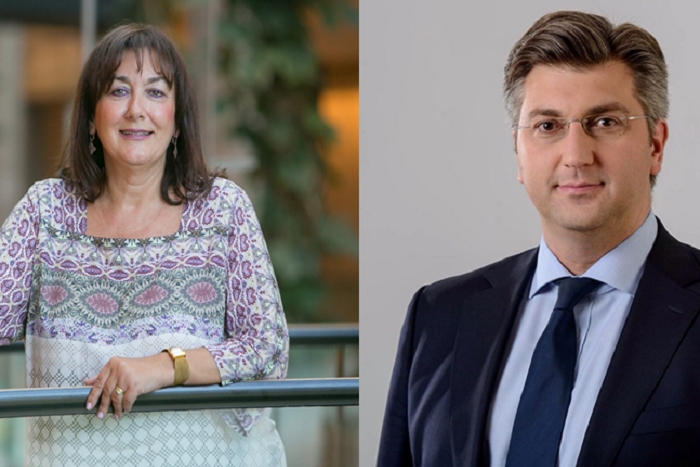 During the debate on MEP David McAllister's draft report on the progress of Serbia, the Head of the Croatian EPP delegation Dubravka Šuica and Vice President of the Committee for Foreign Affairs Plenković both made speeches. In her speech Šuica referred to the Serbian policy towards Russia and she condemned Serbian flirting with Russia, as well as incoherence of this with the policy that of the EU. Furthermore, when it comes to a constructive approach of the Serbian government towards neighboring countries, Šuica thinks that it is necessary to do much more on the subject of the border dispute on the Danube, on the issue of more than 1,600 missing persons from the Homeland War, as well as about the issue regarding the return of remaining cultural property.

Plenković said it would be good for Serbia and neighboring states that it make progress in the field of political, legal and economic reforms. Plenković commented on Article 3. of the Serbian law on organization and jurisdiction of Serbian authorities in war crimes proceedings through which Serbia spread a kind of universal regional jurisdiction for war crimes in the territory of other states of the former Yugoslavia, through which it has infringed on the principles of criminal and international law on legal certainty and non-interference in the internal affairs of other states. A striking case of this is of Croatian was veteran Veljko Marić. Plenković stressed that it is absurd that Serbia - whose authorities are not able to clearly condemn the hate speech of the indicted war criminal Šešselj - claims to be the ˝regional Hague after the Hague˝.

It is therefore crucial to exert pressure in order to retract the relevant provisions of the Law that are directed against EU Member States and other neighboring countries. Šuica emphasized the need to open the archives of the former Yugoslavia and added that it is necessary to insist on the implementation of human rights and personal freedoms, highlighting the issue of Croatian war veteran Veljko Marić, in the context of which Šuica considers it necessary to revoke universal jurisdiction in Serbia for war crimes.

Plenković concluded that Serbia should decide about its path in terms of foreign policy. If it wants tp join the EU, then it should join the EU's foreign policy positions, including in relations with Russia, i.e. EU restrictive measures, especially when it has assumed the presidency of the Organization for Security and Co-operation in Europe. He recalled the exchange of views in December 2014 during a meeting of the Committee on Foreign Affairs with the Serbian Minister Dačić, who even after the European Parliament Resolution on accused war criminal Šešelj of 27 November, did not condem his hate speech on this occasion. Neither did other Serbian officials like Prime Minister Vučić and President Nikolić, who until 2008 were members of the same radical Serbian party as accused war criminal Šešelj.

Plenković believes that this is not good and that Serbia, as a country that wants to join the EU, should accept democratic standards and be very clear in condemning Šešelj's warmongering rhetoric. When it comes to respect for minority rights, Šuica highlighted the 2005 Agreement between Croatia and Serbia on reciprocating guaranteed civil and political rights of national minorities and noted that unlike the Serbs, for which three seats in the Croatian Parliament are guaranteed, Croats are not provided the same treatment in the Serbian National Assembly.